The first people to live in Ireland were the Mesolithic people, who arrived from Britain over 9,000 years ago. They first settled at Mount Sandel, which is in modern-day Coleraine in Co. Derry. As time went on, they moved to other areas and their population grew. At some point, however, Mesolithic life declined in Ireland.

The Neolithic people arrived around 4000 BC. They were the first people to bring farming to Ireland.

Although Mesolithic and Neolithic people were very similar, there were also some differences in how they lived. Houses changed, tools and weapons changed, and farming changed the way of life in a big way.

Then along came metal...

Next Stop: The Bronze Age. 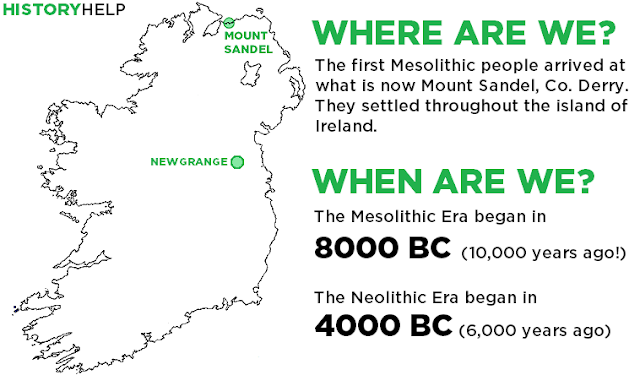 4. The first Irish people were hunter-gatherers. What kind of food did they eat? (2009 OL)

PEOPLE IN HISTORY (HL and OL)
Tips and Advice

So, writing about the Neolithic people, what would you say?

Making mistakes like those will cost you marks, as the information you write down must be relevant (important). You get 2 marks for every relevant point you make, so try to make sure you have at least 10 relevant points in each answer. The more you have, the less chance you have of losing too many marks if you get anything wrong or mix anything up.

The websites below have a lot of information about Mesolithic and Neolithic Ireland.

MountSandel.com
Coleraine Borough Council in Northern Ireland operates this interactive site which allows you to explore Mesolithic and Neolithic life with games, puzzles and information about how people lived in those times.

BBC History: Neolithic to Bronze Age
The BBC website has pictures and information of Neolithic and Bronze Age life in Britain, including facts about Stonehenge, one of the most famous standing stone structures in the world.

Newgrange
The Newgrange website is operated by UNESCO which contains a lot of detailed information and pictures of Newgrange and its story.

Ask About Ireland: Ireland's Early Inhabitants
This site has a lot of information for young people about the different stages in Irish history, starting with the Mesolithic and Neolithic people.

tRTÉ: Dig It! Ireland - Neolithic Ireland
The RTÉ show has its own website, which has information on the different ages in ancient Ireland, as well as the episodes themselves.
Posted by Jason Kelleher